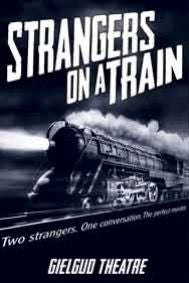 Strangers on a Train, Craig Warner‘s adaptation of Hitchcock’s ’51 adaptation of Patricia Highsmith’s novel was billed as a tightly scripted noir thriller of intrigue, adventure and deceit. This should have put the piece right up my street, ticked all my boxes and sent me home happy, even if it was average. I’m afraid to say that I didn’t leave the Gielgud Theatre happy.

I will say this, the staging was magnificent, and clearly a lot of money had been invested in it; I wonder if the cost of this might accelerate the financial decline and eventual cancellation of a production that was already discounting stalls seats two weeks after opening. Beyond that? Well, from here on in there’ll be mild spoilers and generally moaning, sorry.

Let me start off with noir, perhaps my favourite of genres, or tones of genre, irregardless of whether the execution is classic, like The Big Sleep, adapted like in the cyberpunk genre or modernised as with Brick. There was no a single element of noir visible on stage last night, despite that being the lure dangled beneath my gaping maw. (Quentin Letts described Strangers as being ‘as noir as a triple espresso‘; trust me when I say that I know both, and it was neither.) What they did have was all their sets and clothes and imagery in monochrome, which really isn’t the same thing. The idea was to create the feel of a black and white movie, but ended up coming across as ham-fisted and trite. Though perhaps that was done to complement the ham-fisted and trite overacting on display? The overuse of the monochromatic even extended to an overuse and misrepresentation of Plato’s Chariot Allegory.

Storywise, the tale featured overdone exposition, spending big chunks of time reiterating to characters what the audience, and in some case the characters, already knew. I know it was always meant to be the case that there were no innocents in Strangers, but not only were we robbed of a clear protagonist, I felt not a shred of sympathy for either of them, no matter how often the script told me to feel sorry for someone. The whole tone seemed off: for a thriller there were times I was bored; the lines that were supposed to be poignantly tragic got laughs; instead of tension we got clownish capering.

Okay, I’m glad I’ve got all that off my chest, I really do feel better for it. I enjoy the theatre, and even something you don’t enjoy can be interesting to watch, a way of filling the tanks. It was always the goal to experience more theatre next year. I think I should embrace that, rather than abandoning it, but perhaps I need to be guided as to what to see. Apply within.